Four days after the feast of St. Josephine Bakhita, adopted as patron by victims of human trafficking, Pope Francis met with 110 survivors of this terrible trade at the Vatican. There to honor February 12’s International Day of Prayer and Reflection Against Human Trafficking, Zenit reports this was the first such visit tied to the date by a reigning Pope. The Holy Father has been speaking out against this issue since his election to the Chair of Peter in 2013.

On the date of St. Josephine Bakhita’s feast, Zenit said the Holy Father asked for prayer “so that the Lord will convert the hearts of the traffickers.” He has suggested any lack of action is due to unwillingness to wage war against “criminal organizations and corruption.” Last year when he spoke out against human trafficking after the Sunday Angelus in July, he stated: “This is ugly, it is cruel, it is criminal! I would like to draw on everyone’s commitment to make this aberrant plague, a modern form of slavery, adequately countered.” He then led the crowd in a Hail Mary. 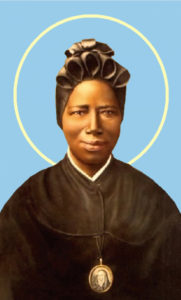 St. Josephine Bakhita was a former Sudanese slave, canonized in 2000 by Pope Saint John Paul II. Trading hands at least five or more times by the age of 19, she was finally freed and converted in Italy with the help of the Canossian Sisters. She received her first Holy Communion and Confirmation at the hands of the future St. Pius X. At her canonization ceremonies, the Holy Father stated: “I invite the whole Church to invoke the intercession of St Bakhita upon all our persecuted and enslaved brothers and sisters, especially in Africa and in her native Sudan, that they may know reconciliation and peace.”

The Church has been increasingly stressing the need to solve this crisis and the estimated number of those trafficked varies widely. The U.S. State Department put that number around 27 million in 2013, while the Walk Free Foundation lists the number globally now as nearly 46 million. Human Life International (HLI) President Father Shenan J. Boquet himself recently participated in the Diocese of Orlando’s first such conference on how to combat the problem. Covering the issue in his weekly column, Fr. Boquet wrote:

“Unfortunately, many ignore trafficking because victims often originate from poor environments/families and easily disappear without much notice. And yet, they are human beings with inherent dignity, which poverty cannot annihilate. We should all be concerned when a human being is stalked, sold into a way of life from which only a few will escape, and treated as a commodity.”

Indeed, many in the Catholic Church are fighting for liberation from traffickers, from Pope Francis to the Coalition of Catholic Organizations Against Human Trafficking. The United States Catholic Bishops Conference (USSCB) maintains a multilingual helpline. If you suspect someone may be a victim, have him/her call for help: 1-888-373-7888.