Isn’t Abortion Protected by the Constitution?

Isn’t Abortion Protected by the Constitution?

This constitutional argument is often used by pro-abortionists. As former U.S. President Barack Obama once asserted, “I remain committed to protecting a woman’s right to choose and this fundamental constitutional right.”1 Obama, once a law professor, should have known that this right doesn’t actually exist ― the Supreme Court literally conjured it out of thin air.

Creating a Constitutional Right to Abortion

In the 1960s, revolution ― especially of the sexual variety ― permeated the air, wafting even into the hallowed chambers of the Supreme Court of the United States.  The justices set about finding a means by which they could enact a far-reaching liberal agenda, and concluded that extending the right to privacy beyond its natural and legitimate dimensions would be the ideal means for accomplishing this objective.

Of course, we do indeed possess an authentic right to privacy, founded in the Fourth Amendment, which protects us from, among other things, unreasonable searches and seizures.  Others enjoy this genuine right to privacy, including married couples, doctors and patients, attorneys and clients, people engaging in business transactions, and priests and penitents.

But deadlier activities require a manufactured legal cover.  As the Gospel of John says, “The light has come into the world, and men loved darkness rather than light, because their deeds were evil.  For everyone who does evil hates the light, and does not come to the light, lest his deeds should be exposed” [3:19-20]. Presently, the courts found the perfect segue into creating a constitutional right to abortion in Griswold v. Connecticut, the decision overturning a Connecticut law prohibiting the sale or distribution of birth control devices.

The court system of the State of Connecticut correctly believed that the use of contraceptives would eventually lead to the breakdown of the family and the degradation of marriage.  In fact, the State’s Supreme Court had already turned back several constitutional challenges to the law.  But it could not withstand an activist U.S. Supreme Court, which handed down its Griswold v. Connecticut decision on June 7, 1965.  The majority found that the Connecticut law violated the “right to marital privacy,” which was found in the “penumbras” and “emanations” of other constitutional protections.  Justice Arthur Goldberg thought that this protection might lie in the Ninth Amendment, and Justice John Marshall Harlan speculated that it might lie in the Due Process Clause of the 14th Amendment.

In Griswold, Justice Harry Blackmun, who authored Roe v. Wade, wrote that “The Constitution does not explicitly mention any right to privacy.  In a line of decisions, however, the Court has recognized that a right of personal privacy . . . does exist under the Constitution.  In varying contexts, the Court or individual Justices have indeed found at least the roots of the right in the First Amendment, Stanley v. Georgia, and in the penumbras of the Bill of Rights.”

In his dissent, Justice Potter Stewart wrote, “With all due deference, I can find no such general right of privacy in the Bill of Rights, in any other part of the Constitution, or in any case ever before decided by this Court.”

Next: “Constitutional Right to Abortion” The stone was rolling: the Supreme Court quickly expanded the right to purchase and use contraceptives from married to unmarried people in its 1972 decision Eisenstadt v. Baird (1972).  The third word in the “right to marital privacy” quickly disappeared. Soon after, of course, came the January 22, 1973 Roe v. Wade and Doe v. Bolton decisions, which have led to the extermination of nearly one-sixth of the American population under a supposed constitutional right to abortion.

This “right” had escaped undetected by two centuries of legal scholarship, so to justify it the justices once more turned to the nebulous privacy “right.”  The Legal Times exposed the negligence of the reasoning process of the justices:  “Looking back on that argument, [Sarah Weddington] laughs as she recalls that Justice Potter Stewart asked her where in the Constitution she found the “right” to abortion she had so fervently argued.  “Any place we find it will be okay with you, right?” Stewart asked Weddington.”2

The Illicit “Right” to Privacy Leads to Other Grave Injustices

The paramount damage done by the illicit privacy “right” is to the cardinal virtue of justice, “The moral virtue that consists in the constant and firm will to give their due to God and neighbor” [Catechism, ¶1807].

When people claim a ‘right’ to privacy in order to cover illicit and sinful actions, as in a constitutional right to abortion, justice always suffers grave damage, because the rights of God and of other persons are simply disregarded.  Some examples:

Every American cherishes his privacy.  Everyone believes that “a man’s home is his castle,” and almost everyone wants the government to interfere with his private life as infrequently as possible while still maintaining society’s fabric.

Since Americans value the concepts of ‘privacy,’ ‘freedom’ and ‘choice,’ anti‑lifers illegitimately extend them to cover their own behavior.  Thus, they label any opposition to abortion, homosexual acts, euthanasia, and other abuses ‘intrusive,’ ‘anti‑freedom,’ and ‘anti‑choice.’ 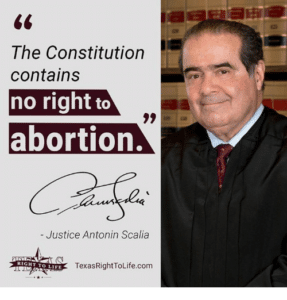 Pro‑lifers and other pro‑family activists must not feel guilty in the least when opposing abortion, euthanasia, homosexual acts, child pornography and other hideous sins/crimes by the extreme Left.  After all, anti‑lifers simply use the ‘right’ to privacy as a license to abuse ― and kill ― other human beings. This is not a constitutional right to abortion but rather a twisting of the language Constitution for ideological purposes.

The great weakness of the illicit privacy right is becoming more and more obvious.  The more illicit individual freedoms we demand, the less genuine individual freedoms we actually have.  We cannot walk down the street in safety, we cannot drive without being endangered by road rage and drunks, and our children cannot even attend public schools without putting their lives and their souls in danger.

If the anti‑lifers have their way, they will continue to extend the ‘right’ to privacy until it destroys any chance we have of living together without seeing each other as mere objects to be exploited for personal pleasure and gain. The supposed constitutional right to abortion is just a beginning.

After his ignoble disgrace, Satan was being expelled from Heaven.  As he passed through the Gates, he paused a moment in thought, and turned to God and said, “A new creature called Man, I hear, is soon to be created.”  “This is true,” He replied.  “He will need laws,” said the Demon slyly.

“What!  You, his appointed Enemy for all Time!  You ask for the right to make his laws?”

It was so granted.